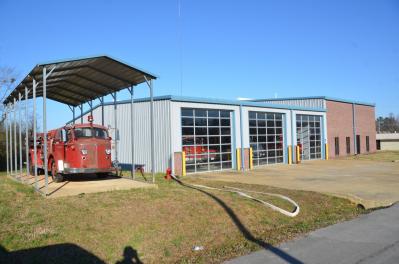 Ashland is located in extreme Northern Mississippi, the County Seat of Benton County.  The town itself is approximately 1 1/2 square miles with a population of 577 according to the 2000 census. Our department serves the town and surrounding rural Benton County with Fire Protection and limited emergency medical response. Our department also provides rescue (automobile extrication) services for the northern 2/3rds of BentonCounty.

We have been fortunate over the last few years to be able to upgrade our equipment and expand our services. The first pumper, a used 1954 American LaFrance 700 Series, was bought in 1968. The engine house was also built that year. As the department grew quickly and as its responsibilities increased, a second pumper was purchased in late1973. This new 1973 American LaFrance 1000 Series was one of the finest fire apparatuses in the area at that time. In 1976, the department built a tanker on an army surplus 2 1/2 ton chassis. This tanker was capable of transporting 1450 gallons of water and greatly increased our fire fighting efficiency in areas not served by the municipal water system. The department's equipment remained about the same until rescue service was added in 1993 (the first rescue call was on Christmas Eve, 1993). At that time, the former Benton County Ambulance was converted into a rescue unit and, with our first set of Holmatro® rescue tools, including a dual pump, hydraulic cutter, spreader and ram, was placed service. Since that time, our firemen refitted a modular type ambulance as the new rescue unit to replace the old, undersized truck and a high pressure air bag system and combination rescue tool set was bought. In 1997, we took delivery of our new Pierce pumper. This pumper is a Pierce Responder on a Navistar chassis and is outfitted with 3 inch supply line, 1 3/4 inch attack lines and ample compartment space.

The Town of Ashland, under the 2001 Mississippi Small Municipalities and Limited Population Counties Grant Program, received a $245,000 grant for the construction of a new fire station.  The new station measures 80’x100’ with 3,200 square feet of office space (more than the entire former facility) on the first floor and room to add a second story later if needed.  The contract was awarded in July, 2002 to Griffin Classic Builders of Ripley and volunteer firemen finished the majority of the final stages of remaining work.

The department has 30 active members, led by Chief Chris Shoup, the department's third chief. The department is currently rated at a class 8 by the Mississippi State Rating Bureau. We are hopeful that with the addition of a second high capacity well and back up power for the old well as well as other improvements that we will soon be able to achieve a class 7 rating.